Claranet was named Managed Services Provider (MSP) of the Year at the DCS Awards 2015 last night (14 May 2015) for the second year running. According to Claranet’s UK managing director, Michel Robert, the award comes as important validation of the company’s customer-centric strategy and reinforces Claranet’s position as the leading independent MSP in Western Europe. 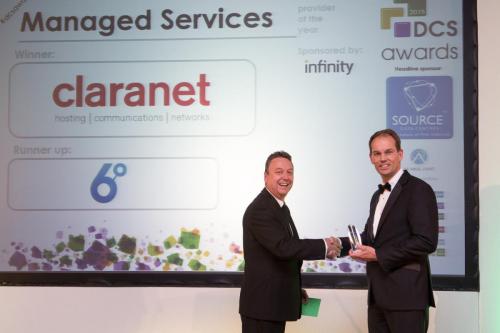 The DCS Awards were established to recognise product designers, manufacturers, suppliers and providers operating in the data centre arena. Now in their 5th year, the Awards have gone from strength to strength, recognising the achievements of IT vendors and their business partners alike.

The MSP of the Year category was one of the most hotly contested categories of these awards. A two-stage judging process saw entries first assessed by a panel of industry experts, before being shortlisted for a public vote.

“As a company we have made significant progress over the past 12 months, strengthening our partnerships with key vendors in the industry, such as VMware, HP, Microsoft, and Amazon Web Services, and making strategically important investments in our infrastructure and services. As such, we are very pleased to have these efforts recognised, not just by the judging panel, but also by those who voted for us.

“Having recently completed a major refinancing initiative, we are in a strong position to capitalise on the gains made thus far and hope to make it third time lucky when the DCS Awards come around again in 2016.”