Oh Polly is a fast-fashion multi-channel brand aimed at the 16-30 female market. Founded in 2015, the business has emphasised innovation in its approach to growth, cultivating a large online following through Instagram, which drives the majority of traffic to its website. Following the website’s launch in 2015, traffic numbers now exceed 2 million monthly visitors.

As a fast-fashion boutique, Oh Polly was experiencing surges of traffic during seasonal trading events such as Black Friday and Boxing Day. Initially, the company had been using a traditional hosting model, but as the business grew – doubling in size year on year – it became increasingly difficult to cope this way.

Operating on a small cluster, with limited caching, meant that the site suffered from slow page loads and even struggled with the demands being placed on it during lunchtime peaks, leading to regular outages. This was having a significant impact on both the customer experience and lost sales.

The situation came to a head on Black Friday in 2017 when the site crashed in the face of traffic of up to 7,000 concurrent visitors - severely hampering the revenue generated for the day.

Black Friday is one of the biggest trading events of the year, but our website was simply not able to cope.

Following this, it became clear that the company required a more flexible arrangement that could scale up and down seamlessly, accommodating sudden surges in traffic and orders on the website, all in time for Black Friday 2018. At the same time, security was a big concern for the business, so Oh Polly began searching for a partner that could carry out a smooth migration while adding a further layer of protection for sensitive data. 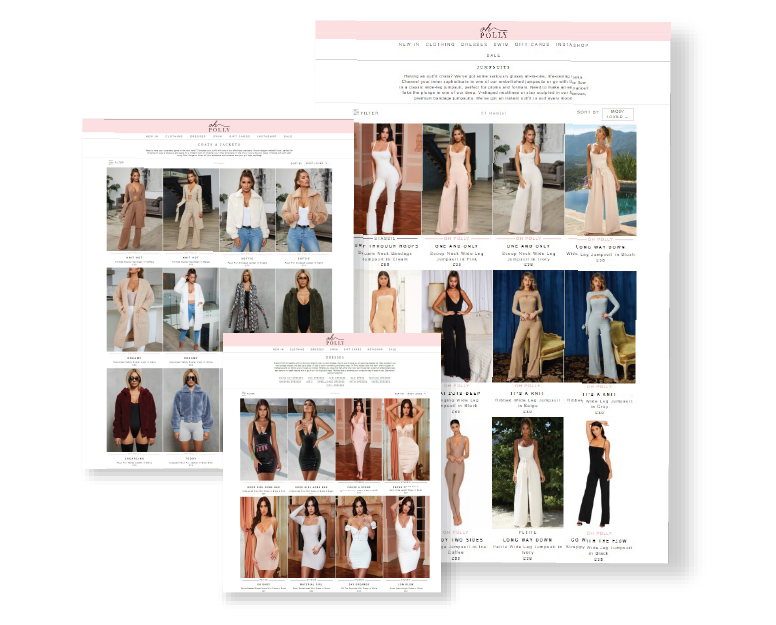 Mike Branney, Managing Director at Oh Polly, commented: “For Oh Polly, Black Friday is one of the biggest trading events of the year so we want to maximise traffic as much as possible. But in 2017, our website was simply not able to cope with such a sharp upturn in visitors.

“Not only did this affect our margins, it also went against our core philosophy of offering a great customer experience and a next day delivery service. Part of making an ambitious growth strategy work is being able to make the most of events like this one, but we were seriously short in this area.

“Given the nature of our business, a change was needed. Looking at the options, we recognised that a Cloud solution hosted in AWS would help address the load, flexibility, and adaptability issues we were experiencing.”

With just under two months to go before Black Friday 2018, Oh Polly called on Claranet to devise and execute the company’s migration to AWS. A main priority was for everything to run smoothly when the site was relaunched, so Claranet first created the new environments in a non-production AWS account.

In this test environment, Claranet could stress-test the applications to see how well the new Oh Polly website would cope under a surge in traffic, and were then able to deal with any issues that appeared before going live. To do this, Claranet used a configuration management tool called Puppet, which also allowed the team to safely test changes to code before they hit the production environment, and gave Oh Polly full visibility around how the infrastructure works.

From a security perspective, Oh Polly also wanted to become more PCI-compliant. To achieve this, Claranet ensured the entire implementation was carried out in accordance with AWS best practice from beginning to end.

Claranet also put a centralised logging environment in place, enabling Oh Polly to view PHP, application errors, and all requests on a single dashboard, giving the IT team access to logs from their web servers and their applications.

Alongside all of this, Claranet also built new caching components from scratch, enabling Oh Polly’s front and back end to run significantly smoother than before, resulting in a fast, responsive new site. All of this was achieved in six weeks and completed a couple of days before Black Friday.

We were immediately impressed with Claranet’s wide range of expertise and skills.

The benefits of the new solution for both Oh Polly and its customers were immediately obvious. With the new infrastructure in place, Oh Polly was able to scale from three web instances to well over 100 on Black Friday – a huge improvement in capacity, which could be achieved in the space of five minutes. Thanks to this upgrade, Oh Polly no longer had to employ a queuing system for its customers. This translated into a hugely significant financial benefit, with the company doubling its year-on-year Black Friday takings to £1 million.

Additionally, Oh Polly now has a much easier way of deploying new applications and code, as IT teams are now able to test in a safe, non-production environment before deciding whether or not to go live with anything new. This has allowed the business to accurately predict how its applications would perform in different circumstances, which has minimised errors and maximised success.

We can now run flash sales without having to worry about the reliability of our infrastructure.

Mike commented: “We knew that Claranet had a positive track record with similar fast-fashion brands, making them a clear choice in helping us migrate to AWS. We were immediately impressed with Claranet’s understanding of the platform, as well as the wide range of expertise and skills they were able to show from day one.

“Claranet’s dedication to the project was paramount to its success. Their team took the time to understand our needs and went to great lengths to ensure our new infrastructure was ready for any eventuality. We can now run flash sales without having to worry about the reliability of our infrastructure. When celebrities drive additional traffic to our site through our marketing efforts, we are now able to cope with the increased demand.

“As a result, our IT team no longer has to worry about fire-fighting, and can now focus on using their talents on more innovative activities to help us grow the business.”