A customer's perspective: Journeying to the cloud - migrating away from a legacy platform
Skip to main content

This blog is used with permission from Sift, the digital agency, who are a customer of Claranet's. The original blog can be found here.

A few years ago a venture capitalist told me the secret of success when growing a technology business was to sell the company within a single technology cycle. His reasoning was that you really didn’t want the hassle and risks of transitioning your platform from one paradigm to the next. This post is for those of us with longer term aspirations.

In our case, the project started in 2007 and culminated six years later with Sift’s CIO Chris Wood switching off our servers at Verizon just before Xmas last year (as evidenced by the empty racks and redundant servers below), consolidating everything with Claranet and Amazon. 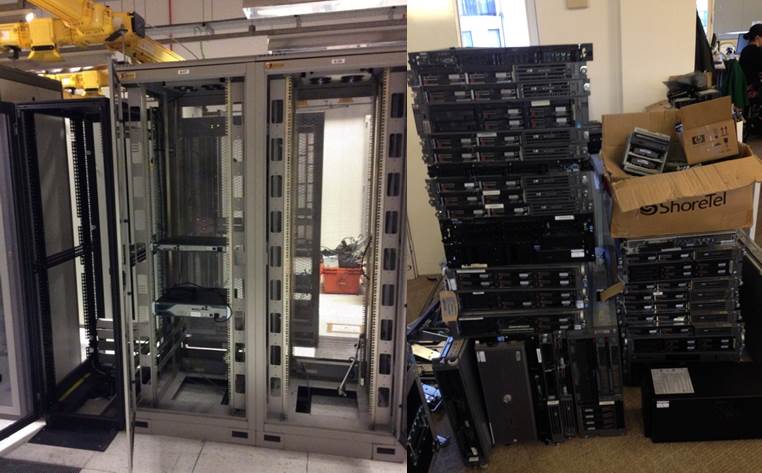 We started hosting with Verizon in 2002. Out of necessity, we’d constructed a proprietary platform (CMS, ad delivery, reporting, email, user DB, task-tracking, etc) with 60+ physical machines and managed all the infrastructure ourselves – effectively trying to be experts in everything. And we had almost as many servers again in the office running internal systems, development environments, etc. There were single points of failure, complex spaghetti and many hidden dependencies. All this took significant time to maintain and support, and there were many risks we just had to accept (or ignore).

The on call guys had regular trips in the middle of the night to restart servers and crawl under racks. There was also the time soon after Chris Wood started as Sift in 2005, when he came to tell me Verizon had advised to shutdown the racks due to dangerously high power usage – a 16 amp fuse had welded shut on the main power board and the systems were pulling 30 amps!

The benefits of moving to a modern managed services provider such as Claranet, is not just the obvious (multiply redundant internet connections and professional management of the physical servers), but having a modern technology partner; in contrast to a dumb hosting environment. So now we can have conversations with Claranet about how we can adopt some hybrid cloud solutions with Amazon and the like, or the latest developments in server architecture or how to improve business continuity scenarios.

There are also cost efficiencies. Our total costs with Claranet last month were 50% what they were two years ago (a six figure saving). In addition, our capex costs our now significantly lower.

We started moving some sites to Claranet in 2008 soon after we adopted Drupal as our development platform. It was relatively easy to move Sift Media’s titles over as they’re fully within our control. Sift Digital’s clients were also fairly straight forward as new clients went straight to Claranet from 2008 and we’ve gradually moved the older sites as they’ve been redeveloped, or switched them off as we’ve lost them as clients (it happens). The most difficult area though was the PracticeWEB platform, used by 1,000 of our accountancy clients. If you delve beneath the surface of many businesses transitioning to a full SaaS approach, there will be some thorny legacy issues. Not only was the old PracticeWEB platform running Perl spaghetti, each client site had its own separate domain and unique design.

First of all we had to rebuild the platform in Drupal, which involved putting a six man team in a room offsite for 18 months. By the middle of 2010, we were able to start migrating clients to the new platform (now branded as ‘Landscape’). From a practical perspective, we were able to script much of the migration, with our outsourcing partner in Sri Lanka cutting up the designs manually; but from a client perspective the workflow (UX) of the admin of the new platform was utterly different. So it made no sense to present clients with a new site for their firm, which looked the same, but had a completely new engine; when what they wanted was a new look and feel, and were only marginally excited about having better administration functionality. We therefore took a much slower approach, working our way through the clients, offering them redesigns and new product options.

Finally, there was the complication of getting the clients to make the necessary adjustments to point their sites at the new platform (changing the A records). In order to hit the internal deadline of Xmas 2013, some of the customer services team were ready to visit client premises to physically arm-twist the laggards!

The wider transition of services to the cloud goes on. In April this year, we’ll ditch our internal Microsoft email infrastructure and move to Google. I didn’t realise until recently that those that want to can still use Outlook as an email client. And internally many of the company are already fully on Google Docs.

PracticeWEB’s development team is constantly developing the Landscape platform, but thankfully this can now happen on a rolling monthly release cycle, which doesn’t require any actions by the clients!