The Telegraph Media Group is an award-winning multimedia news brand with a 160-year heritage. In recent years, the business has evolved its multi-platform service, with a portfolio including The Telegraph website and mobile app, The Daily Telegraph and The Sunday Telegraph print titles, and The Telegraph Edition mobile app. In addition, The Telegraph works with a wide range of digital partners including Snapchat, Apple News, Google AMP, Amazon Alexa, and Google Home.

TMG is focused on a subscriber-first strategy with the aim of reaching 10 million registrants and 1 million subscribers to the Telegraph by 2023 - dubbed 10-1-23. As part of this strategy, TMG is looking for ways to bring more value to their readers by making evergreen content easier to find, in a modern template.

To ensure that their technology platforms are always up to date, a key strategy for them is to always be upgrading and modernising their platforms, and critically, their content management and distribution systems. In the last cycle of this strategy the CMS was replatformed, and the one it replaced was kept active to serve the millions of archive articles. It was later discovered that this archive content was incredibly popular and drove a significant percentage of traffic. However, this content was not presented in it’s best form and was difficult to provide a consistent and modern reader experience. Clearly, having an older system supporting all this traffic was a risky proposition, but the challenges faced to migrate the legacy CMS were very high and, at that point, uneconomical.

"Often old CMSes are neglected and forgotten about, but we found that this particular CMS was still responsible for 10-15% of all our web traffic,” explains Andrew Gregory, Systems Engineer Manager. “Plainly the content on the CMS was still useful and interesting to our audience, so making sure it was fully modernised and operating effectively would contribute greatly to achieving our 10-1-23 strategy."

The CMS supporting infrastructure had been built using old tools, and due to its age was starting to become unreliable. Andrew and the team decided that the best thing would be to migrate the CMS from their current provider to Google Kubernetes Engine (GKE), rather than spend time and resources fixing it. But its age and condition meant that migration promised to be almost as painful as fixing it - until the team heard about Migrate for Anthos.

"It seemed to be the ideal solution,” Amit Lalani, Senior Systems Engineer, notes, “as it would let us migrate and modernise the entire CMS into GKE without having to rebuild it."

The partnership with Google allows The Telegraph to use cutting edge technologies knowing that they will always get the support they need. At the time, Migrate for Anthos was a new solution and The Telegraph’s migration would be one of the first in the UK. Andrew and the team knew, though, that with the right partner they could make a success of the migration using Migrate for Anthos - and luckily, Google already knew of a partner who could help.

"A truly collaborative approach and a positive culture helped us get the results we wanted from the project."

The Telegraph was already working on a wider project to migrate their estate from their existing provider to GKE, and at the outset of that project Google had recommended Claranet as the partner of choice for the migration. As one of the first providers with full training on Migrate for Anthos, it made sense that Claranet help with this pioneering project.

Claranet immediately set up a special team to support The Telegraph with the migration, including two members of the Google Cloud team. An initial workshop was run to understand Telegraph’s current position and build a plan for the migration.

"This project wasn’t quite like anything we’d ever done before,” says Prabhat Handoo, Senior Cloud Specialist for Claranet. “At this point Migrate for Anthos was still in the early stages of development, and as such it was changing very rapidly and some documentation for it didn’t even exist yet.

It was a really interesting challenge and one that everyone - The Telegraph, Claranet and Google Cloud - was invested in making a success."

Crucially, unlike traditional engagements between client and supplier, the three parties agreed to share responsibility for different aspects of the project, with Claranet handling overall management. “Claranet and Google were both careful to make us aware of the potential risks of using Migrate for Anthos at this early stage. A truly collaborative approach and a positive culture helped us get the results we wanted from the project,” says Andrew Gregory.

As the project progressed, close communication between the three parties was essential to success. “The Claranet team set up a Slack channel to keep us all in touch. It was great for getting quick answers and working in an agile way,” says Amit Lalani. 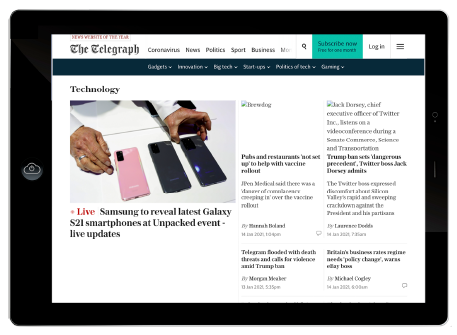 Migrate for Anthos was built to be straightforward to use, giving anyone an easy path to modernize existing workloads into containers. And ultimately it did live up to that promise. But, given that it was in beta during this project, progress wasn’t always smooth. The team encountered bugs, unexpected errors, and version compatibility challenges between TMG’s Java application and GKE. But great teamwork and technical prowess kept things moving forward. “I know that the Claranet team actually helped write some of the documentation for Migrate for Anthos as we went through the project,” Amit remarks, “and the representatives from Google Cloud were just as helpful. Any time we had an issue, they were on hand to quickly get things resolved for us.”

"Working with Google Cloud and Claranet was absolutely essential to the success of this project."

The migration moved the three environments of the legacy CMS, each containing 10 VMs, from The Telegraph’s current provider to GKE - in total, 2 terabytes of data. Despite the challenges the team faced, the migration was completed and as a result, the CMS is now running in containers on GKE, giving The Telegraph better agility, scalability, and reliability than they were getting previously.

"It’s been great for our sanity," says Andrew. "Managing our front ends is now so much easier - we know that if one fails then a new one will spin up automatically. Our editorial users get exactly the same experience as they are used to - even down to the URL they have to visit to interact with the CMS - so from a business perspective the migration has been really successful."

It’s also very rewarding for the team to have been part of a pioneering project in the UK. Prabhat says, “this was a very challenging project, working with cutting edge technology and really ironing out the kinks in it as we got into the project. In the Claranet office we already had a lot of respect for the technical abilities of the team at The Telegraph - and this has just reaffirmed that. Andrew and his team have been a pleasure to work with.”

"We’re really pleased to have led the UK in using Migrate for Anthos,” Amit Lalani concurs, “and the team behind us has been absolutely essential. If we’d tried to do this on our own in such a short time, just working with the documentation, I’m not sure we’d have managed it, but without Migrate for Anthos we would not have even attempted to containerise the legacy CMS. Working with Google Cloud and Claranet was absolutely essential to the success of this project."